If you are a commodity investor, you most likely have been enjoying a peaceful sleep since Russia’s invasion of Ukraine on Feb 23. Well, at least until earlier this month. While the broader markets have suffered massive losses, commodities have enjoyed strong price rallies which were last seen decades ago. This passage seeks to shed some light on the events that have transpired and how they have impacted the commodity markets.

Two things to be noted about the market, it is smart but also highly reactive. The latter tends to be even more pronounced in times of panic. March 2020 is a prime example of this theory. Events such as geopolitical tensions tend to result in mounting worries and consequently, inflows into asset classes deemed to be safe haven assets. In metal commodities, this usually results in a rally of gold and subsequently, silver prices. This is because as opposed to money, physical gold cannot be printed and therefore has a history of maintaining its value over time, serving as an insurance in times of adverse economic events such as a war. The difference with the recent Russia/Ukraine war is that it not only led to rallies in gold and silver, but commodities in general, including some soft commodities such as wheat.

The outbreak of COVID-19 caused disruptions in what was considered to be normal economic activity. With the whole world imposing strict lockdown restrictions, the supply and demand dynamics of numerous industries have drastically changed. For commodities, some metals that were in market deficits pre-pandemic moved into further deficits due to the pandemic disruptions. Some commodities that were in market surpluses have maintained a surplus position due to lower demand that has resulted from lower economic activity. To delve into a more specific example, let’s look at the performance of PGMs (Platinum Group Metals). If you consider a price performance chart of palladium and rhodium since the start of 2017, it is evident that both these two metals have enjoyed significant rallies and were well on their way up, until the outbreak of COVID-19 in mid-March 2020 (Exhibit 1). 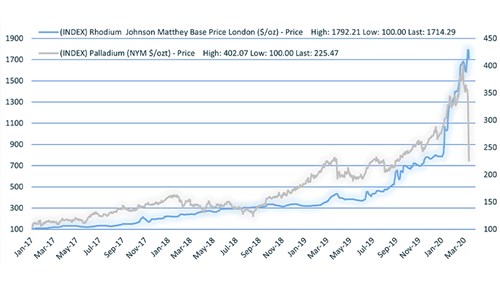 The reason for this was that PGMs are primarily used in autocatalytic converters in order to reduce the harmful fumes emitted from the combustible engines of cars. The growing pressure to move into a carbon-neutral world resulted in a spike in the demand for metals that could help facilitate a cleaner environment. PGMs screen at the top of that list in the automotive industry. Global palladium and rhodium supplies were already not meeting the growing demand for their uses in car manufacturing which resulted in the significant rallies seen in the prices of these metals. Now, you may ask yourself how this all links to the Russia/Ukraine war. To answer this question, it’s important to look at Russia’s commodity Exposure.

Russia plays a key role in the global commodity markets. Much like South Africa, it is one of the world’s largest suppliers of PGMs. According to research done by RMB Morgan Stanley, Russia’s share of global palladium production is 37%. It also makes up about 17% of global gas production, and about 10% of global gold, oil and platinum production (Exhibit 2). 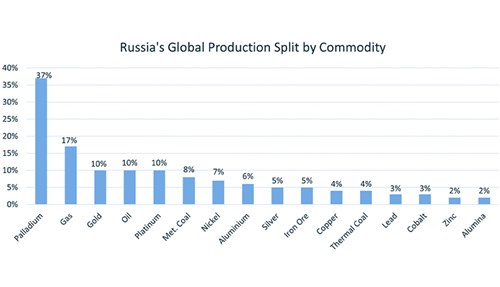 The escalating tensions between the two nations have increased worries that the export supply of commodities Russia produces will not only be temporarily disrupted, but also be disrupted in the longer-term through bigger nations like the US, EU and possibly China imposing sanctions on Russia. The current sanctions that have been imposed have not directly impacted bulk commodities, but the market concern is that many buyers are now looking to disassociate themselves from Russia’s commodities. The resultant effect has been a rally in commodity prices, some rising to multi-year highs. For the first time since September 2014, the price of Brent crude oil crossed over $100/bbl. The broader industrial metals have also enjoyed the ride, with nickel prices more than doubling from where they were trading at the start of the year.  Palladium, rhodium, natural gas and coal prices are all up in the double digits year-to-date. Though it is difficult to quantify what the demand destruction will be when this is over, it is evident that commodity markets are pricing in a scenario under which Russia’s portion of supply will be excluded from the market.

Financial Freedom is not about being wealthy