While AB-InBev outperformed its peers and the JSE ALLSHARE index in terms of total return until its acquisition of SABMiller in October 2016, it has since underperformed against its peers.

Despite its strengths, but also considering the business model which appears to be at odds with market trends and current conditions, I argue that it is likely that AB-InBev’s underperformance is likely to be perpetuated at least in the short- to medium-term. 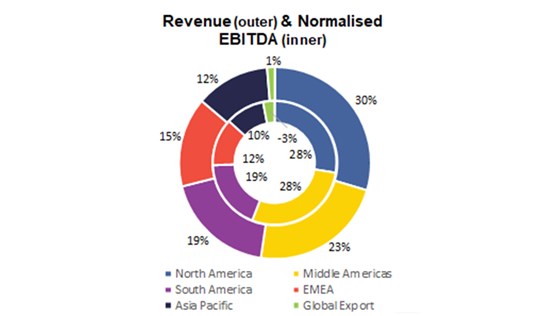 AB-InBev is the largest global brewer by beer volume and the most diversified geographically, with number one positions in the United States, Mexico and Brazil, three of the top five most profitable beer markets in the world as well as South Africa and Columbia.

The mantle of the largest brewer in the world since the acquisition of SABMiller in 2016 brings with it/augments certain key group advantages, namely, strong market positions in multiple emerging and developed markets, an extensive portfolio of brands, strong market trend intelligence and brand development capabilities, scaled distribution capabilities and best practice category know how, especially in developing markets.

These factors have also enabled the group’s low/no alcohol beers, and more recently, craft and pure malt beer and hard seltzer innovations and its premiumisation and category expansion framework strategies. These factors have also proven critical in the progress that AB-InBev has made in delivering organic revenue growth in recent years, and importantly slowing the decline in its key developed market, the United States.

So, in AB-InBev we have a globally diversified brewer (with an EM bias) deploying a portfolio brand approach (with a mainstream bias) with experienced management that has effectively leveraging its strengths.

However, in recent years EM economic growth has been under pressure, including China amidst the COVID19 outbreak, trade wars, commodity, and specifically oil price gyrations and slowing world growth. These have heightening fiscal pressure in many EM countries and meaningfully impacted consumer affordability, and are likely to perpetuate the trend seen in recent years of declining volumes in the discount and mainstream (where AB-InBev is over-indexed) and positive volume growth in the premium and super-premium categories (where AB-InBev under-indexes). The key issue is that the multiple reports show that the middle class is shrinking while the top 10% are hitting new highs in income in many parts of the world. 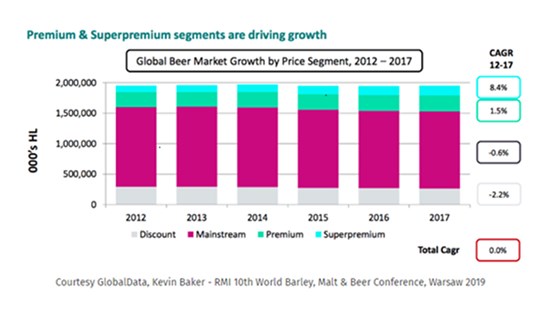 This, together with AB-InBev’s introduction and sales drive of lower margin products (hard seltzers, low or no alcohol & smart affordability strategy), suggests margin pressures are structural, compounded by the need to invest more heavily in trends.

Another factor to consider is the group’s high leverage. Through disposals, cost savings and debt re-financing to secure lower interest rates and extend payment terms, AB-InBev has made progress in deleveraging according to plan, and with an eye on creating M&A wiggle-room. However, the financial risk exists that a COVID19-driven downturn could frustrate this progress. It is no surprise then that it was reported in the Financial Times on 17 March, that AB-InBev has “drawn down its entire $9bn loan facility from global banks to help the company stave off the effects of a co-ordinated global abstinence.” This supports the view that while management has recently lowered its volume growth guidance, we believe that analysts’ scepticism that this lowered guidance will be met, is motivating earnings downgrades.

Finally, where earnings growth has been supported in recent years by the benefit merger cost savings and synergies, these are unlikely continue as the group has achieved the targeted savings.

I believe, one cannot ignore the strong market trend and macro-economic factors, which are weighing down on the group’s operating model and nor can one ignore the minimal size of initiatives (introduction of hard seltzers in the portfolio) in the group context can add to group volumes and their impact on the group financials.

AB-InBev has experienced management with a proven track record of M&A activity and delivering synergies thereon, as recently re-affirmed by the delivery of the over US$3 billion of cost savings ‘promised’ from the SABMiller acquisition. While I have no doubt that they will continue to make adjustments to the group strategy in order to address the dynamics in the trading environment. However, any such remedial action takes time to implement and so the current market dynamics are likely to negatively impact performance in the short- to medium-term.

However, it is worth mentioning at this point that anecdotal evidence of the negative practical implications of the cost savings and synergies in the case of SABMiller, does raise some concern. Anecdotal sources suggest that the core of SABMiller managers has been removed as part of the cost savings and synergy initiative, and so too, much of the experienced on-the-ground intellectual property and understanding of the African market.

The negative recent events appear to have heavily informed analysts’ recent earnings downgrades and consequent questioning of the relative valuation, particularly in the context of a possible large investment in re-positioning the group more in line with some of these industry trends.

While AB-InBev outperformed its peers and the JSE ALLSHARE index in terms of total return until its acquisition of SABMiller in October 2016, it has since underperformed against its peers. Despite its strengths, but also considering the business model which appears to be at odds with market trends and current conditions, I argue that it is likely that AB-InBev’s underperformance is likely to be perpetuated at least in the short- to medium-term.

So, I believe that exposure to AB-InBev should be lightened, notwithstanding its favoured position in a strictly SA equity portfolio as an offshore income earner and an effective ZAR hedge during this turbulent time 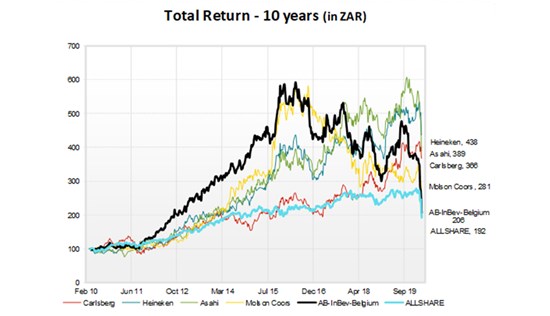 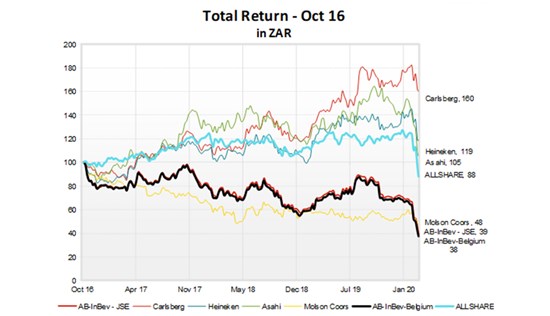 What Sasfin is doing to mitigate against risk amidst COVID-19

As more information emerges on Covid-19, we are continuously evolving our response. We are making good progress with regards our five-point plan namely: