Sasfin has partnered with Impumelelo Day-care, an Early Childhood Development centre in Ennerdale, for the last 5 years - helping to nurture our future leaders.

Impumelelo Daycare Centre began with one shack on the premises of Marjory Xoseka, in what was then known as Thula Mntwana. It started with seven children and Marjory was the teacher and Principal of the school. They were moved many times by the Dept of Housing until eventually they were loaned the ground where they now operate, in Kanana Park. The daycare centre has grown from the tiny little school that they were, to having 200 children ranging from 3 months to 6 years old. Margory also now employs six teachers, a cook and a gardener, all from the surrounding area, and has six classrooms as well as flushing toilets and a fully equipped kitchen.

Marjory attended Professional Childcare College in Melville and achieved her Grade R Diploma certificate, passing with distinction. The school has got succession planning in place and Nombulelo Xoseka is now finishing her Grade R diploma at the same college. The teachers have all been on training courses according to the age group they teach, to ensure that the children get the best start in their education. The teachers are also trained in basic first aid, with Marjory and Nombulelo having achieved a higher standard.

Impumelelo Daycare Centre provides breakfast, lunch and two snacks a day for the children so they are all well-nourished and therefore able to learn better. On graduating from Impumelelo Daycare Centre the children, are welcomed with open arms into any primary school they attend as it is well known that their level of education is of a very high standard. They are all well prepared and can read, write and have a good understanding of arithmetic, with the result that most of our students are in the top 10 percent in the schools they now attend.

What happened to the school during lockdown?

2020 has been a disruptive year for all of South Africa, but especially to the schools and daycare centres in the informal sectors. The children attending Impumelelo were fed two full meals a day (as well as snacks) and with the lockdown this was discontinued. Sasfin donated funds and two Spar stores also donated food parcels to the Impumelelo family, as well as the area as a whole. The school management obtained permission to travel during lockdown and were able to deliver the food parcels to the homes of the people in the area. In some cases, these food parcels were the only food that they had during the lockdown period. The teachers were also unable to teach and consequently they had no income during this period. The school was fortunate enough to be able to pay a portion of their salaries from their savings so that they had some form of income.

Through funding received from Sasfin, they installed four washbasins outside the respective classrooms, enabling more rigorous hygiene for the children. No adults or parents were allowed onto the school property, social distancing was enforced, and there was also temperature monitoring of the kids. New desks were made to allow for the required distances and each desk had a Perspex screen separating the children. All classrooms were sanitised every morning and evening to protect the children. All the preparations proved to be satisfactory to the Health Department who issued Impumelelo with a certificate of compliance – they were the only daycare centre in the area that obtained this certificate.

Sasfin donated funds to Impumelelo to purchase a vehicle in 2018.

A learner receives a cupcake during a party at the school. 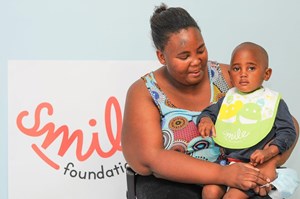 Smile Foundation - because every child deserves to smile.

Afrika Tikkun and Sasfin helping kids from Cradle to Career