Worldwide commodities off to a good start. Commodities have had a good start to the new year following a mixed 2020 which was caused by the COVID-19 global crisis. Energy commodities collapsed while precious metals such as gold had a particularly strong year in 2020. Commodity prices broadly ended the year in positive territory, owing to a strong economic recovery in China which is the world’s largest consumer of most commodities. As the year starts, we are seeing a steep rise in commodity prices which is largely attributable to China’s robust growth in industrial output. In December, China’s industrial production rose 7.3% YoY (year-on-year) and its economy grew by 6.5% in the fourth quarter. This suggests that China is controlling the pandemic and has put its economic recovery back on track while other major economies are the contrast of that.

In the month of January, base metal equities have largely outperformed precious metal equities. Since the beginning of this month, the price of copper has risen by 3%, nickel by 9% and cobalt is up 17%. The hopes around the rollout of Coronavirus vaccinations have resulted in the recovery of energy commodities, with Brent Crude now trading above $55/barrel (up 9% since the start of the year). Iron ore prices have also continued to climb, reaching record levels as Chinese steel output increases, with the country forging more steel than the rest of the world combined. China’s aggressive buying is taking place at a time when the rest of the world struggles with new variants of the virus and extended lockdown regulations which are resulting in supply deficits in most commodities. In this regard, rhodium has had the strongest price appreciation in the sector, surpassing the $20 000/ounce level in the past week. It has returned over 3000% in five years. What has been driving the price recently are the lockdowns imposed in South Africa, which is the largest producer of the metal in the world. This has compounded on the pre-existing deficit in the market. 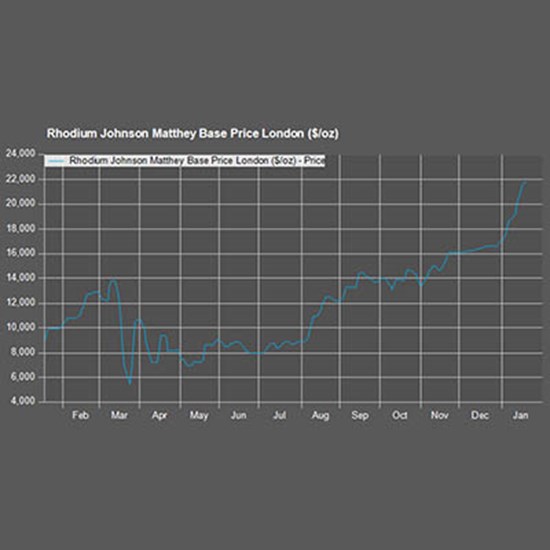 There is a mounting speculation that a new supercycle in commodities has begun, the first since the boom in the 2000s which was driven by massive infrastructure investment in China. The pace at which China’s output is expanding is positive for South Africa’s raw material exports. Companies such as BHP and Anglo American place South Africa as the third-largest exporter of iron ore, holding a 5% share of the global export market. This suggests that the country is well-place to meet the global iron ore demand as global economies regain momentum. It may be too early to tell whether or not the momentum in the sector will persist for the rest of 2021, however, it is off to a good start.