We continue to observe trends in retail sales by type of retailer to try and determine whether any observed pandemic fuelled shifts in consumer behaviour are temporary or permanent.

While it seems futile to try make sense of monthly numbers in an environment that is still being distorted by the impact of the Covid‑19 pandemic, we couldn’t help sharing some of our observations of the 2020 and early 2021 data, to the extent that it develops our thoughts on the retail exposure that we hold in our models and client portfolios. It is important to try and determine as soon as possible whether or not any observed pandemic‑fuelled shifts in consumer behaviour are temporary, and if so, their longevity, or whether the changes are permanent or structural. 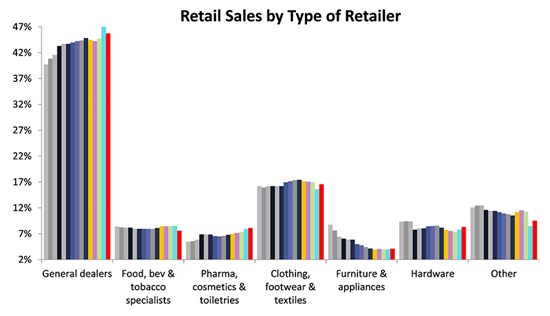 In the chart above we illustrate the retail spending by type as a percentage of total retail spending from 2008 to the year-to-date 2021. We make the following observations:

In conclusion, while it is still too early to draw definitive conclusions on the lasting impact on consumer behaviour and the retail spending patterns, it appears that some shifts in spending behaviour are proving a little sticky and it seems plausible to expect some permanent nuances in the composition of retail spending.

Anglo American’s commodity mix is the most diversified amongst its peers.