This article reflects our views on various health related matters as it relates to the recent National Budget announced on 24 February by the Minister of Finance.

The list of topics is by no means exhaustive given the extent of fiscal related issues that need to be addressed. With this in mind we will, for the most part, conclude by merely summarising the final health related matters highlighted in the budget speech.

In previous years the long-term priority areas outlined in the National Development Plan (NDP), as it concerns healthcare initiatives, centred on the establishment and implementation of National Health Insurance (NHI)[1]. While Government continues to press ahead with the NHI scheme, reinforced by the health pandemic, we nevertheless expect a fiscal shift to the initiatives in response to the pandemic.

As we gain a better understanding of what would define a successful COVID-19 response and accept the reality that to keep the virus under control will in all probability not be confined to one year, the fiscal requirements become clearer.  It is also evident that the correct budget prioritisation in 2021 is of paramount importance, as Covid-19 will have implications beyond a single financial year – government should consequently plan for the future and budget for rolling vaccination programmes.

As reported by Business Day, the Supplementary Budget Review 2020 noted that “a reprioritisation of the budget was made to assist the health sector to prepare for a rising number of cases, including expanding capacity and ensuring personnel are protected”.   This resulted in a total of R21.5 billion being reprioritised to public health services, increasing the consolidated healthcare expenditure from 11.8% (February 2020 Budget) to 12.1%.

Furthermore, as advanced by various sources, the public health impact of the pandemic reaches beyond the pure numbers of COVID-19 cases and related deaths, with the full repercussions still to be quantified.  The economic impact of Covid-19 in 2020, was pegged at an approximate loss of R389 billion (approx. 8.2% of GDP), coupled with a dramatic deterioration in the fiscal position of government. From an economic perspective, the damage has been severe. Economic activity came to a complete halt for a number of weeks in the second quarter of 2020 across many sectors, with real GDP shrinking[2] and unemployment rate reaching a record high[3].

Understandably, a successful COVID-19 vaccination program will support South Africa’s economic recovery.  For this reason, the prioritisation of the national budget to cater for adequate vaccine supply and distribution is non-negotiable. As has been widely cited, if South Africa is not able to successfully achieve its goal of herd immunity, it is likely that the country will experience further waves of infections. This will presumably be coupled with restrictions being renewed accompanied by the negative economic consequences. Realistically, the dichotomy we will invariably have to come to terms with, by reprioritising expenditure to fund vaccines now, will be the possible negative impact on economic growth and welfare over time, given the feeble economic growth, and governments vision of an expanded role for the state in the economy which is at odds with the present fiscal reality. In this regard, and as pointed out by various commentators, the public investment splurge since 2007 coincided with a drop in productivity and growth, indicating that much of it was wasteful. 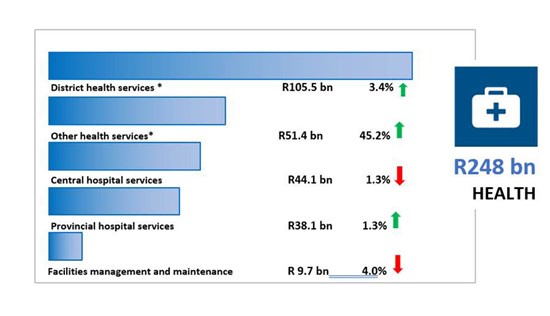 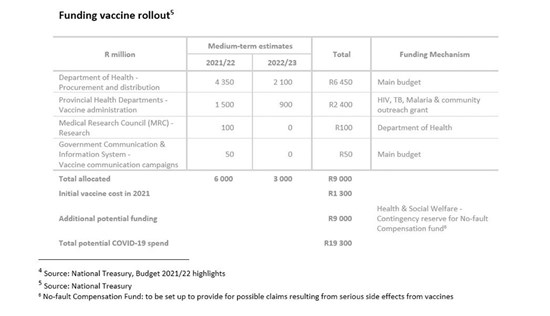 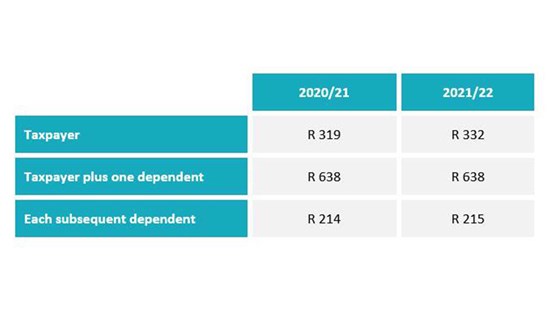 Unlike previous years, Eskom, SAA and NHI were not front and centre of the budget. That notwithstanding, and considering that South Africa is far from out of the woods in terms of a debt spiral, the budget was largely welcomed by analysts as it attempted to address the debt while not raising personal and company tax. However, there remains a lot of work still to be done to make it a reality beyond the short term. Simply put, there is no reprieve from the hard choices ahead. As pointed out by certain media reports, while treasury remains resolute in continuing to pursue public service savings, which incorporates the politically difficult public sector wage freeze, what are the odds of getting that past the unions during a year of local elections ? Furthermore, by cutting social grants and simultaneously lowering the corporate tax rate will surely not go down well with the ANC alliance. Because finance and healthcare are inextricably linked, it’s important to note that the planned spending cuts didn’t prevent the finance minister allocating money where it really matters – paying for the vaccine programme. Predictably, the budget projections are set to be tested – only time will tell.

[1] NHI would pool healthcare resources and skills and see the state become the primary provider of healthcare services.

[6] No-fault Compensation Fund: to be set up to provide for possible claims resulting from serious side effects from vaccines