The second quarter of 2021 was yet another period of positive gains for global equities having increased a little over 7%. 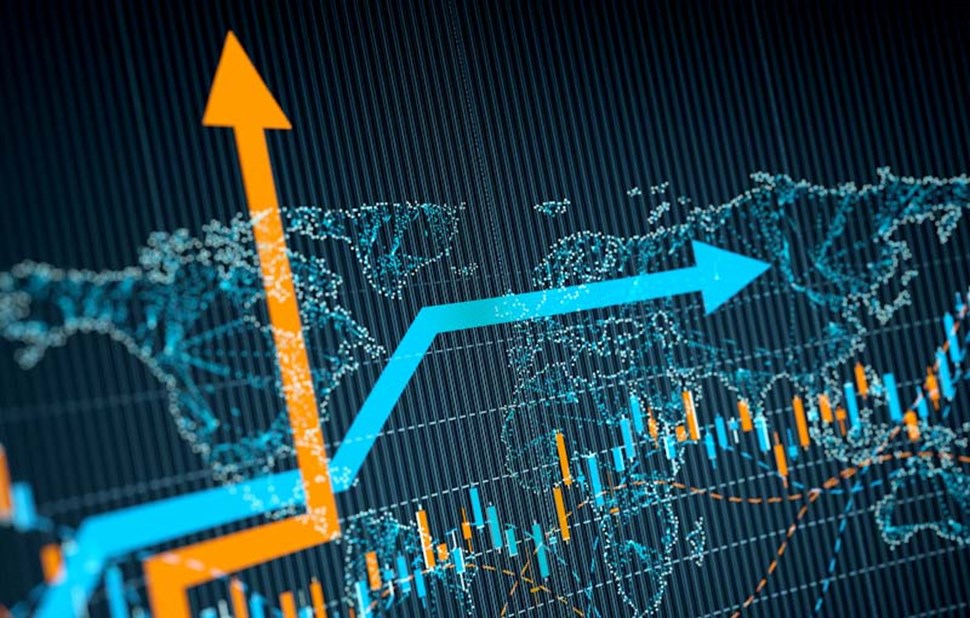 The second quarter of 2021 was yet another period of positive gains for global equities with the MSCI All Country World (“MSCI ACWI”) index, a broad measure of global equity markets, increasing a little over 7%. Since the lows of March last year, the rally in equities has been fairly uninterrupted though there has been a change in leadership.

On a day that came to be known as “Vaccine Monday”, the 9th of November saw a marked shift in market leadership as positive news broke reporting the efficacy of the Pfizer vaccine. Prior to this date the rally in equities was led by a combination of stay-at-home stocks that allowed societies to work, learn and shop remotely as well as large-cap internet platforms and cloud computing companies underpinned by long-term secular-growth themes which provide durable growth regardless of the environment. The above cohorts can be sorted into the “growth” category of stocks.

The positive news surrounding the vaccine provided a foundation on which economic growth could be achieved. As a consequence, stocks more sensitive to changes in economic activity and therefore most likely to benefit from an economic recovery moved from the back to the front of the line of stocks leading the equity rally. This cohort of stocks, which can be classified as “value” stocks, has outperformed its growth counterpart since Vaccine Monday as the MSCI AC World IMI Value Index has return 25.9% compared to the 19.3% return of the MSCI AC World IMI Growth Index. 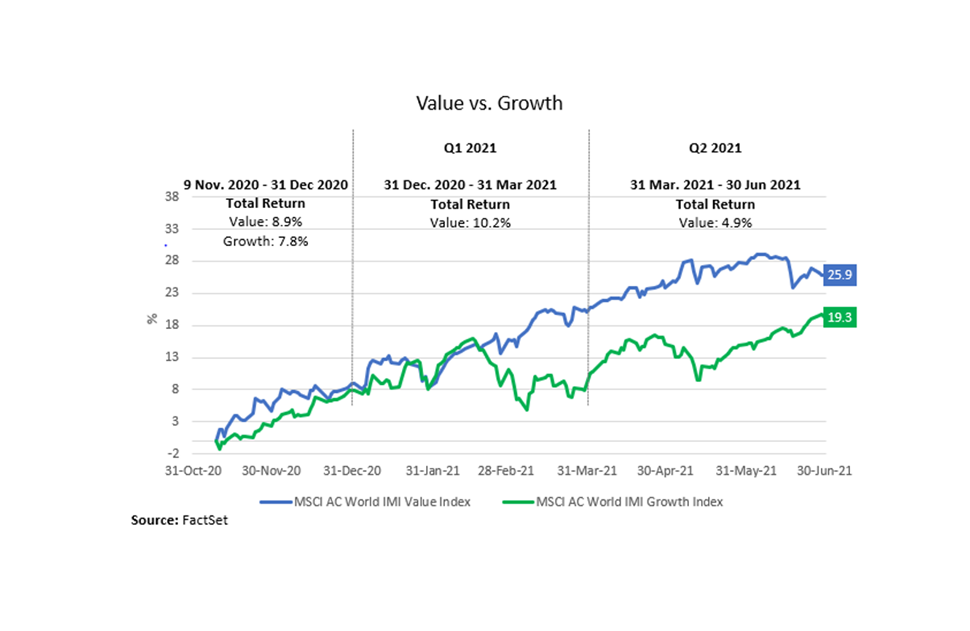 Prior to the 9th of November, most of the gains in global equities could be attributed to multiple expansion as investors crowded around the Big Tech growth stocks as they offered an element of defensive growth coupled with the safety of bullet proof balance sheets. However, with a change in leadership came a change in factors driving up share prices. Rising growth expectations for earnings has replaced multiple expansion as the main driver of equity gains especially in the cyclically sensitive value stock sectors such as energy, financials and industrials. 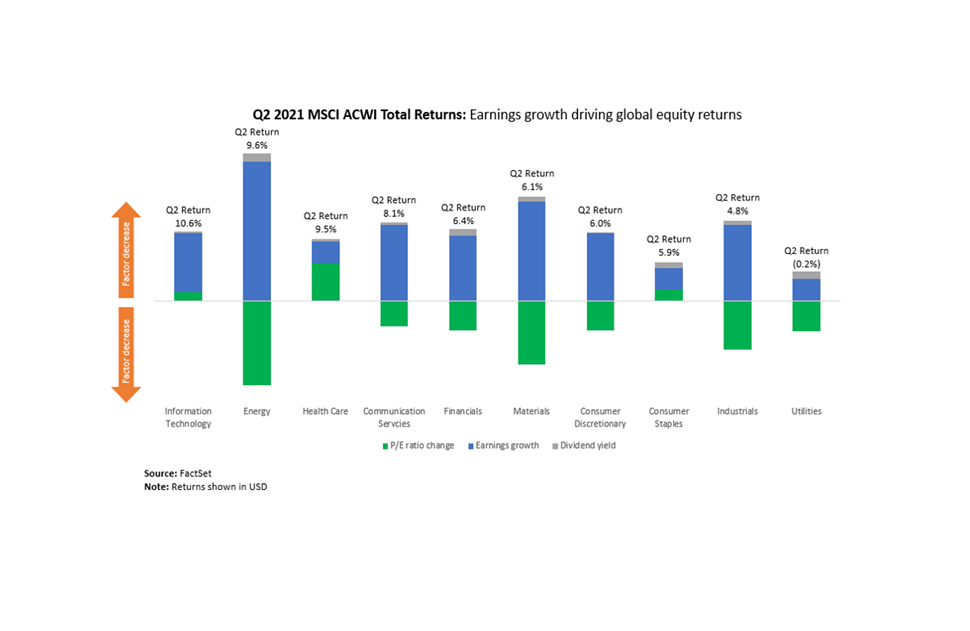 The earnings outlook for the financial sector, which includes banks and insurers, has improved. Yield curves, especially in Europe, have steepened due to a combination of higher expected economic growth and increasing inflation expectations. Steeper yield curves, which imply higher future interest rates, positively impact the operating margins for financial stocks. The removal of restrictions on share buybacks has also provided a tailwind for these stocks. Consumer discretionary stocks are poised to benefit from pent-up consumer demand (remember when people would travel on holidays or even just eat out?) underpinned by increased household savings which were further buttressed by government stimulus checks.

Since the start of the year, surging commodity prices have significantly elevated the earnings outlook for the energy and material sectors. The price of Brent Crude increased nearly 20% during the second quarter and is now trading above $75 a barrel, its highest level in over three years, as demand by the largest oil consuming nations, the US and China, continues to normalise. Industrial metal prices remained red-hot during the quarter following significant increases in the prices of aluminium (+14%), iron ore (+29%), nickel (+15%), and tin (+23%) and a slightly more modest increase in the price of copper (+6%) though the price of the red metal has increased more than 50% compared to the same time last year. Such rapid price increases as well as concerns over shortages has led to the Chinese government selling state stockpiles of industrial metals in a bid to squelch rising prices which did in turn lead to price weakness in certain commodities towards the end of the quarter. Platinum group metals, which are used as catalytic convertors in the automotive industry, experienced significant price increases over the past year, especially rhodium, which has risen from a “low” of $6,700/oz in March last year to reach nearly $30,000/oz during the quarter. The massive price spike was likely driven by increased supply deficits exacerbated by COVID and its impact on supply chains but as supply has begun to normalise we have seen a sizable fall in the price of rhodium though it is still currently trading above the $20,000 level. 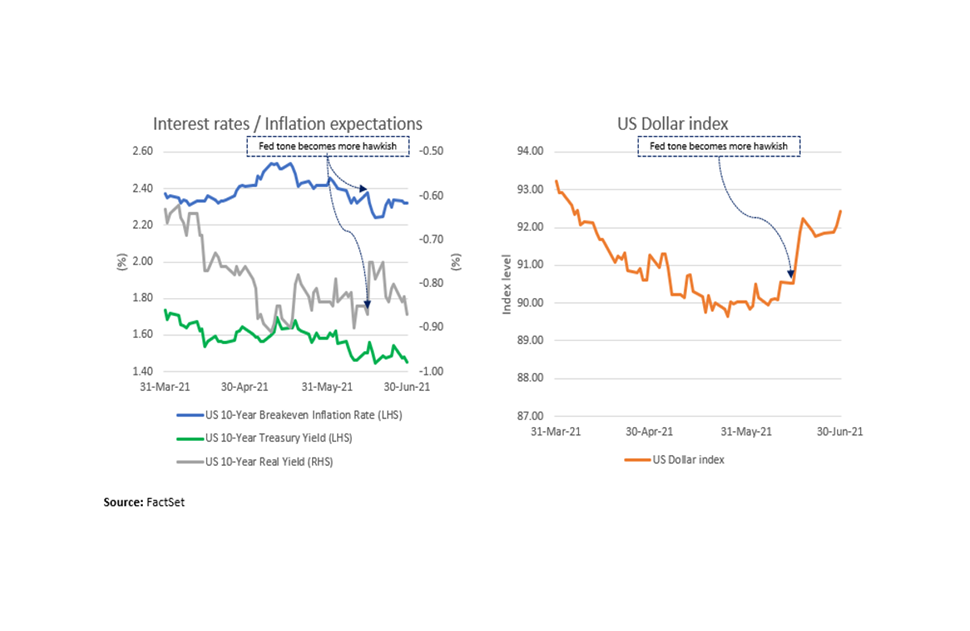 Rising commodity prices, along with considerable government fiscal support and accommodative monetary policies, are among the major factors contributing to rapidly rising inflation. During May, inflation in the US and the Eurozone rose to 5% and 2% respectively. This may have prompted the US Federal Reserve (“Fed”) to, somewhat surprisingly, adopt a more hawkish tone (guard against excessive inflation) as it now expects to raise interest rates sooner than it had previously indicated. Inflation expectations – as viewed through the US 10-Year breakeven inflation rate – declined somewhat following the shift in tone. The US dollar reacted positively to the change in tone as higher interest rates in the future should quell rising inflation, adding support to the greenback. A stronger dollar may have also been a contributing factor to weaker commodity prices, particularly those produced in emerging markets. Value stocks, which are expected to perform better on a relative basis during an inflationary environment, reacted negatively to the prospect of lower inflation whereas their growth counterparts were propelled higher. This may just be a correction rather than a reversal of the rotational leadership into value stocks but the following must still be taken into consideration. Whilst a decline in inflation expectations may be playing a part in the return story for growth stocks, particularly those in the information technology sector that have benefited from an up lift in their earnings multiple, we have also witnessed an improving earnings outlook for secular growth stocks such as those in the information technology and communication services space. In this regard, consideration must be given to the idea that even though the global economic recovery continues to reinforce the improving earnings outlook for cyclical stocks on a broadening basis, it may be masking significant disruptions to certain business models that have evolved as a result of shifting consumer behaviour as well as the acceleration of the digital economy that took place during the pandemic.

A stronger dollar may also be playing its part in the weaker gold price. Higher levels of inflation saw the price of the yellow metal rise above $1,900/ozt during the quarter but the strengthening dollar has coincided with a subsequent fall in the price of bullion which closed the quarter at $1,763/ozt. 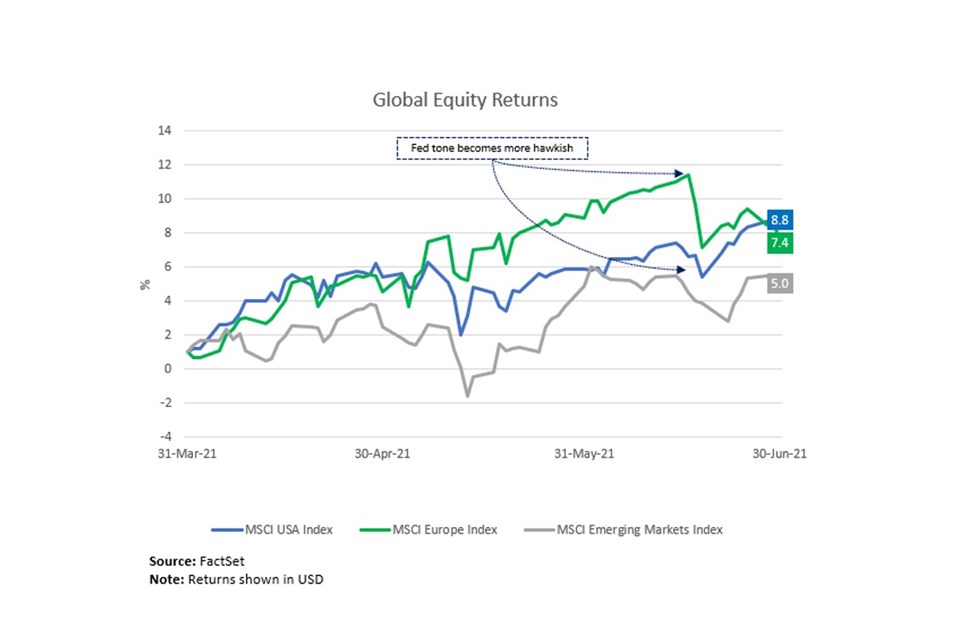 Economic growth is likely to be asynchronous with different sectors and geographies benefiting at different stages of the recovery. Those countries that are further along in terms of vaccinating their populations are likely to benefit sooner than others and the trajectory of regional stock indices mirrors this school of thought. The US has led the way in global vaccinations and strong earnings have helped solidify investor confidence in its economic recovery. European equities briefly surged ahead of the US as vaccination programs in Europe began to accelerate as the earnings outlook for European equities appears even more positive than the US with Europe’s heavier weighting towards value sectors a likely contributing factor. The recent strength that the US dollar has shown did however negatively impact the cyclical-heavy European equity markets as the MSCI Europe Index finished the quarter below that of its US counterpart.

Compared to the above developed markets, emerging markets have lagged behind on their vaccination efforts and so have emerging market equities relative to those in developed markets. Emerging market indices which tend to be more weighted towards technology stocks, particularly north Asian markets such as China, Taiwan and South Korea, have underperformed amid a rotation towards value stocks. Additionally, emerging market indices weighted towards dollar-based commodities have also struggled against the recent dollar strength. One such market is of course the local JSE All Share Index. The commodity heavy index ended the quarter flat as a stronger dollar, following the Fed’s more hawkish stance on inflation, led to declines in the majority of mining stocks. The local index was also weighed down by negative returns from technology stocks Naspers and Prosus, as a fall in the share price of Chinese Technology giant Tencent (which is partly owned by the technology group) and negativity surrounding the proposed share swap between Naspers and Prosus continues to impact share price performance. The negative performance in mining and technology stocks was offset by gains in financials and consumer discretionary stocks (Richemont and other clothing retailers) with share price gains stemming from an improvement in the outlook for their respective earnings.

One could easily be tempted to believe that the broad-based gains we have seen in global equities will continue into the remainder of the year. The anticipated growth in earnings, at least in the near-term, provides a positive backdrop for this view yet there are number of risks that we should mindful of that could dampen market optimism as well as future earnings prospects. Over 100 countries, including the world’s leading economies, have reached an agreement which would see a global minimum tax rate enforced upon multinational companies. The agreement is only likely to come into effect in the next two years but it would reduce the earnings outlook for many large corporates with Big Tech companies a target under the new regime. One might have thought that the frosty relations between the US and China would have thawed out somewhat with President Biden taking the helm but instead the US-Sino trade war that erupted under the Trump administration is set to continue. The Biden administration has kept many of the tariffs already in place and it seems intent to meet China at the battle line with increased spending on technologies such as 5G and semiconductors. The US would have further angered China by engaging with Taiwan to revive trade and investment talks. China remains firm that Taiwan should be unified with the Chinese mainland and increasingly aggressive military actions by China have raised concerns over conflict in the area. Perhaps of most importance, in just over a year we have witnessed unprecedented levels of monetary and fiscal intervention. The ultimate impact of these developments on certain segments of the economy as well as financial markets remains far from certain. Market dynamics could quickly shift, be it policy changes (or even adjustments), inflation and liquidity events stemming from such interventions could surprise, leading to a withdrawal of support for those that might be in need or that lack the financial strength to continue through this cycle.

Jonathan joined Sasfin in 2015. He is an analytically aware investment professional with over 15 years’ experience in the financial services industry, focusing on equity analysis and investment banking. Offering expert analytical and communication abilities as well as advanced skills in equity valuations, financial modelling and project management.

Cryptocurrencies are a new asset class evolving rapidly in an increasingly tech-driven economy. 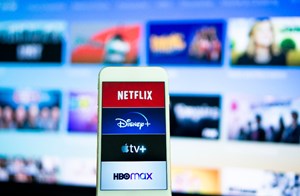