Sasol held a business update conference call on Wednesday afternoon, in which it highlighted its strategy for the new “Sasol 2.0”.

Some of the topics that it discussed were:

1) Split into Two Entities: The business has been split into two entities which are the Energy (African) and Chemicals (US and European) businesses.

2) The Rights Issue: The company said the final decision on the issuance and scale of the rights issue will depend on various factors, including whether or not more asset disposals are completed successfully. It also suggested that if product prices remained at current levels, the rights issue could be avoided. The final decision will be announced in February 2021 when the interim results are released. But should the rights issue take place, it will be capped at $2bn.

3) Debt Reduction: The current debt stands at about $10bn and Sasol plans to reduce it to $6bn by the end of the 2021 financial year.

4) Funding: The other source of funding outside of the rights issue include “self-help” measures aimed at raising $2bn (with the first $1bn achieved in FY20 savings).

5) Asset Disposals: Sasol’s planned value of asset disposals is $3bn, of which $2bn has already been raised through the sale of a 50% interest of its base chemicals business at the LCCP, to LyondellBasell. The JV deal was concluded on 1 December. Management indicated that the decision to proceed with a rights issue in 2021 would depend on whether the value of asset disposals could be increased to $3.8bn, as well as whether market conditions would improve or remain at current levels at February 2021. It indicated that an additional $800m in asset disposals could be realised by the end of the financial year.

6) Oil Price Target: The “Sasol 2.0” programme is aimed at moving beyond the deleveraging of the company’s balance sheet in order to reset the group to be competitive and highly cash generative at a $45/bbl oil price. It aims to have the South African business break-even between $30-35/bbl.

7) Capex Reduction: The group’s capital expenditure outlook for the period to 2025 has been reduced materially to between $20-25bn.

8) ND/EBITDA: Management said it would assess Sasol’s debt-covenant headroom in February 2021 and is targeting a Net Debt to EBITDA ratio of less than 2.0x in FY23/24. Should the ratio consistently fall well below 2.5x, it will look to reinstate dividends.

9) Repositioning Future Sasol: Sasol plans to reposition the group for a low-carbon environment in which it plans to further reduce its greenhouse-gas emissions (GHG) by at least 10% by 2030 from its 2017 base.

Post having announced its cash-raise initiative in March this year, Sasol has made good progress in achieving its goals in order to strengthen its balance sheet. It is our opinion that the current market optimism is giving support to chemical and oil prices which are a key positive for Sasol. The current Brent price of ~$48/bbl implies a stronger earnings profile than what was realised earlier this year (below $30/bbl). Should the market sentiment continue, a rights issue may not take place and the group would be in a better position to pay down its debt and reinstate dividends. However, the extension of the company’s maintenance cycle to five years may result in increased future costs. The market volatility also creates an overhang of uncertainty on Sasol’s share price; therefore we maintain our cautious view on the company. 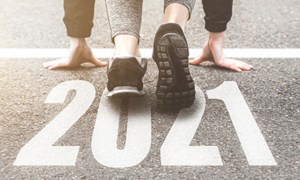 We had big plans for 2020, didn’t we? While the Covid-19 pandemic halted many of these plans, we also learned a lot about ourselves and the world, lessons we can certainly take into 2021.