On 7 April Prosus announced that it will sell 191.89 million shares in Tencent.

On the last trading day prior to the announcement the marked-to-market value of the Tencent investment was worth R2 261 per Prosus share versus the latter’s closing price of R1 729.52, representing a 23.5% discount.

We believe this reflected the scepticism that market participants have of the capital allocation and operational execution ability of management. After all, management has failed to successfully close any large‑scale M&A deals since listing in Amsterdam and now they reduced their stake in a strongly profitable and growing business (Tencent) to invest further funds in their loss‑making unlisted operations.

While the share price reacted negatively, the sale of Tencent shares certainly narrowed the discount at which Prosus trades relative to the marked-to-market value of its listed investments (Tencent, Mail.ru, Delivery Hero and C-Trip) to 21.1% from 28%. However, if one attaches some value to Prosus’s unlisted assets (using peer multiples), cash and treasury shares, then the discount to the group’s net asset value stands at about 33%.

The graph below tracks Prosus’s discount to the marked-to-market value of its listed investments. 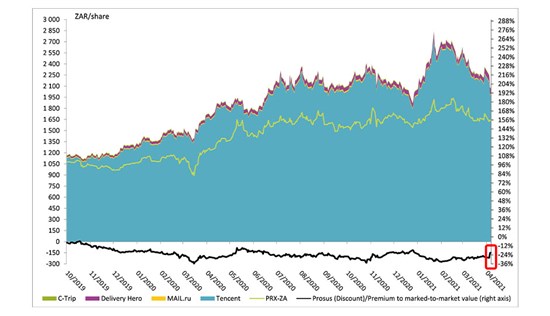 In this webinar, David Shapiro discusses the performance of markets over in recent times and the prospects that lie ahead.