Expectations at the start of 2022 changed dramatically during the 1st quarter as we saw Russia invade Ukraine. Find out more in our latest BCI Prudential Fund Update.

At the start of 2022, expectations were that the Covid-related supply chain disruptions causing inflation would begin to moderate, the US Fed would gradually normalise monetary policy without disrupting the economy, and China would begin to grow at a rate above 6% again.

All these expectations however changed dramatically during the 1st quarter as we saw Russia invade Ukraine, despite staunchly insisting they would not, until they did.  The geopolitical re-alignment we saw in the aftermath of the invasion has been radical in the speed at which it happened as well as the implications.

Prior to the Russian aggression, NATO and the “West” were seen as politically weak, divided, and distracted by domestic issues. It became clear that the Biden administration was able to bridge the political and military gaps much faster than what Putin may have believed and accordingly what was initially expected to be a short-lived military takeover has morphed into a proxy war.  Russia’s military capability has been shown to be overrated and with the imposition of biting economic sanctions, their economy will struggle to avoid a deep and lasting recession.

As a major supplier of key industrial commodities as well as oil, gas and fertiliser saw a number of steep price rises in these commodities, exacerbating the still lingering global supply chain disruptions.  This saw inflation expectations ratchet higher, forcing the Fed to re-evaluate the inflation trajectory.

More recently, over this period another outbreak of Covid emerged in China, and their insistence on a zero-Covid policy necessitated the imposition of even stricter lockdowns across a number of major cities.  As a key player in global manufacturing supply chain, these lockdowns will now exacerbate the current global inflation surge, and accordingly in the US the Fed will be forced to resort to an even more hawkish stance than before.

This faster pace of required rate hikes has led to a substantial increase in the possibility of a global recession – this will be the trade-off in order to bring inflation back to targeted levels.  However, another outcome of this stagflationary episode will be that earnings growth expectations will need to be adjusted downwards, and this has already triggered a substantial de-rating of many stocks which had high growth expectations embedded in their prices.

In the bond market the fact that inflation will remain higher for longer also saw a substantial sell-off, with 10-year yields peaking over 3.0%, which whilst still some way off the US inflation rate of 8%, is a massive move from the 1.5% that it started at in January.

On the back of the elevated commodity prices, our resource sector has benefitted enormously, even leading to government revenue overruns locally.  Whilst initially remaining much stronger than expected, the Rand eventually gave way to the US dollar as the elevated hawkish nature of the Fed implied more rate hikes, whilst the potential of a global recession also saw some commodities come off the boil.  However, whilst off their peaks, local resource stocks still remain at fairly cheap valuation multiples and it is still expected that, looking through the cycle, on a relative basis the sector will continue to do well.

A key issue locally is how our economy will be able to tolerate a hawkish SARB that may be induced into more rate hikes than expected by an inflation trajectory that will be largely driven by causality factors out of their control.  We have already noted that a number of emerging markets have experienced social unrest and riots as food prices have risen, and we have no doubt that in an inflationary environment where food and fuel prices play such a key role in the finances of the poor, it is likely that South Africa too will experience severe socio-economic stresses.  This risk will need to be factored into markets.

We favour the global growth equation over the South African one, but much of our expected underperformance is already factored into valuations – on both bonds and equities.  In particular our bond yields on a real yield basis look exceptionally attractive.  However, if the global inflation wave continues, there is a risk that the relatively muted local inflation expectations would ratchet higher, meaning the inflation risk premium in nominal bonds is not as high as required.  In this respect, inflation linked bonds offering real yields close to 4% are also attractive and we have increased exposure to these.

One key focus at this time of volatility, both locally and globally, will be a focus on quality and resilience, and certainly prices and valuations will reflect this.

In our analysis, the key issues that markets will face during the next 12-18 months:

The importance of these issues cannot be emphasised enough – we are seeing essentially 3 overlapping shifts taking place simultaneously – a normal growth/inflation cycle, a macroeconomic paradigm shift in the sense of generation high inflation rates, and the geopolitical paradigm shift.  The net result is that there can be no return to “normal” in the sense of what the global economy looked like pre-Covid.  In this respect then, it requires a re-calibration of growth prospects and a concomitant reduction in forecast earnings.  This adjustment is already taking place, but there are some market segments that will still face significant pain ahead.

We continue then with our previous scenarios:

A ‘bullish’ one, where none of the worst risks in these issues are realised, but the outcome would still imply heightened volatility for markets, with the backdrop of already strained valuations in some market segments.  This would require only modest further tightening from the Fed – with inflation levels gradually dropping off to settle at levels around 3% and no global recession occurs.  In such a scenario we would expect to see only 4-5 further rate hikes.

A bearish scenario would see inflation, driven by the combination of Covid supply chain disruptions, overly easy monetary policy, the war in Ukraine and China’s Covid lockdowns, remain stubbornly high.  A steep rise in inflation expectations causes Central Banks to raise rates further than generally expected and triggers a short, sharp global recession and a further market sell-off.  Here we would expect to see 7-9 further rate hikes in the US.

Our base case here lies somewhere between these 2 scenarios and with the backdrop of the paradigm shifts we detailed earlier we foresee mild growth contraction but no widespread recession.  This would be inherently disinflationary, and we would see inflation dropping off current elevated levels, but, importantly, not back to pre-Covid levels.  This is important as it speaks to where US Treasury bond yields find equilibrium, which we expect to be between 3.0 - 3.5%.

If we turn again to the local scenarios, we remain reasonably confident that there is very little room for truly significant policy shifts from government, and our monetary policy tightening is always going to be constrained. The risks are rising for socio-economic stresses spilling over again into unrest, and therefore, despite our terms of trade remaining fairly positive, South Africa as an investment destination remains limited for now.

In the scenarios we paint above, this points to a sense of caution going forward - as equities remain vulnerable to a recalibration of earnings growth expectations - especially in sectors where little pricing power is evident, while global bond yields remain vulnerable to a scenario where inflation remains significantly above target levels.

We reduced overall equity weightings early in Q1 by exiting all direct China exposure as well as some broad global ETF’s.  Our previous placing of a derivative hedge on the downside for global equities has paid off and we have reset that hedge further. In the recent market weakness, we have slowly added to exposures again focussing on strong dividend payers.  Whilst we have been overall underweight local equity, but with a bias to resources, we have continued with that stance and will selectively add to our weightings as we gain higher conviction about which scenario is playing out.

We are increasing bond duration as our bond yields have sold-off and added further exposure to inflation linked bonds. We are comfortable that the overall risk budget within the fund is well balanced, and we intend to maintain that approach going forward.

In following its investment philosophy, the management of the fund has been active and prudent in terms of its asset allocation by being dynamic and adaptive as well as being cognisant of any global thematic drivers that will shape future returns.

The Fund continues to enjoy solid returns over the past year, yielding 12.16% over the past year and 9.91% p.a. over the past 3-years, compared to the Fund’s benchmark of 11.02% and 9.10% p.a. respectively which is represented by the average of the (ASISA) SA Multi-Asset High Equity category. The Fund is ahead of benchmark over all measured time frames (please see in chart below) and is in the top half of performance over the 1-year and longer-term when compared to peers. The fund’s long-term target is CPI plus 6%% p.a. 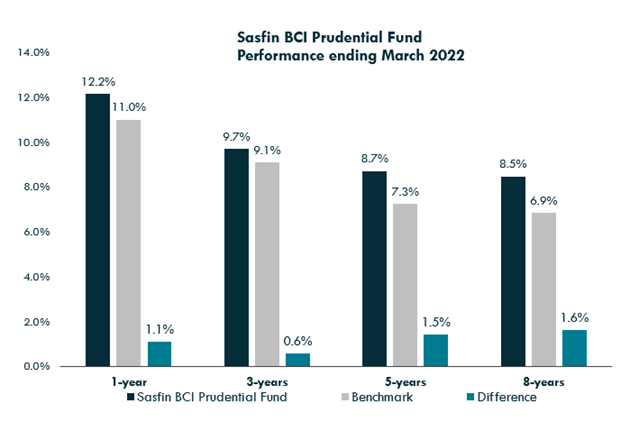