Given that houses are the first asset generally acquired by most South Africans, one would assume that when house prices are depressed, all local assets will suffer a similar fate.

According to Andrew Golding, the CEO of the Pam Golding Property Group, in South Africa there is “a strong culture of owning your home – both from an investment and a lifestyle perspective” (Fin24, September 2018). According to Minette du Plessis of Just Property’s investment division, properties bought for as little as R30,000 35 years ago are now sold for approximately R1,500,000 (Property24, September 2018). If you ignore the maintenance and insurance costs over the period, the annual return equates to approximately 12%.

Average consumer price inflation over the same period was 8.7%. John Loos, the FNB property strategist, says that property prices have been declining since 2016 and started showing signs of a slow-down in 2014 (Business Insider SA, August 2018). Loos credits this to “the broad economic growth stagnation from around 2012” (depicted graphically below).

Given that houses are the first asset generally acquired by most South Africans, one would assume that when house prices are depressed, all local assets will suffer a similar fate. This has been true of the JSE All Share Index, which was essentially flat from February 2015 to December 2018.

The one sector of the JSE that appeared to have weathered the storm was the listed property sector (Real Estate Investment Trusts or REIT’s). For the 15-year period ending July 2018, the sector had an annualised return of 16.1% (source: Old Mutual Unit Trust Category Returns).

At the end of 2018, the picture had changed quite dramatically, with the sector having a 1-year negative return of -25.2%. 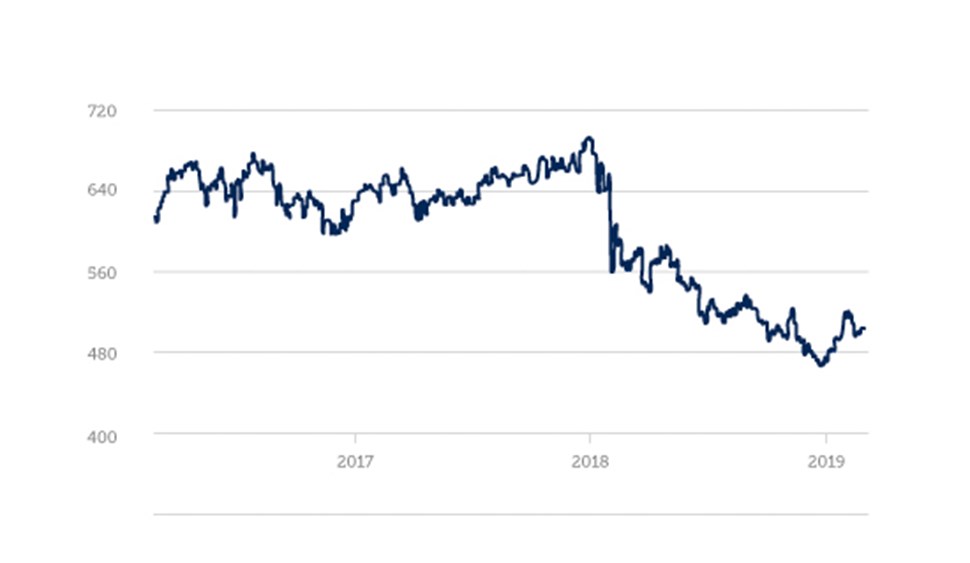 “According to Andrew Golding, the CEO of the Pam Golding Property Group, in South Africa there is a strong culture of owning your home – both from an investment and a J253 SA LISTED PROPERTY INDEX

The graph above suggests that the sector may have bounced off its low and has potential to recover, but the South African economy is still fragile and the government’s current focus is largely on keeping Eskom afloat, as opposed to trying to stimulate the economy. This will undoubtedly limit economic growth for some time, and although we have seen a rally in the stock market since the budget speech on 20 February, there may still be some pressure on local asset prices in the medium term.

If we assume that South Africa will remain in a low growth environment, then the primary investment strategies will probably focus on the generation of income, as opposed to capital appreciation, and this makes the REIT’s attractive. The 2018 drop in the share prices has resulted in an increase in the yields – the 12-month forward yield on the listed property sector is now 8.7% and it is projected to grow at 5% per year for the next 2 years.

“...Investors considering entering the sector should lock in the attractive and increasing yield, with future capital appreciation being a secondary goal..”

The sector yield will therefore To determine the relative value of the yields on REIT’s, they are generally compared to government bonds. Historically, the yields on government bonds are generally in the region of 1% higher than the initial yield on the South African listed property index, but currently the R186 government bond and the REIT index are both trading at a yield of 8.7%. This is a positive signal, as it is an indication that REIT’s are relatively cheap on an historical basis and are potentially due for a recovery.

If we assume a high road scenario with emerging markets becoming more attractive to foreign investors, then the listed property sector should recover strongly, because the desire for yield will create demand, especially for sector heavyweights such as Growthpoint (GRT). GRT is in the top 40 listed companies on the JSE. It has a local and international property portfolio worth R132bn, including a 50% stake in the V&A Waterfront in Cape Town, and has an impressive record of 15 years of uninterrupted dividend growth.

Fundamentally, the sector appears to offer value, and investors currently in the REIT’s need to look through the cycle and not become despondent because of a very weak 2018. Investors considering entering the sector should lock in the attractive and increasing yield, with future capital appreciation being a secondary goal.

Will the response to Moody's downgrade be as vigorous as coronavirus?